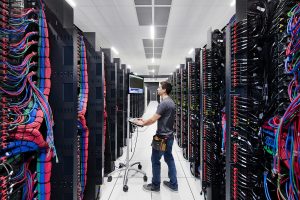 In a recent blog by IBM’s John Considine, GM, Cloud Infrastructure Services, IBM Watson and Cloud Platform, the company announced that NVIDIA Tesla V100 GPU based computing is now available on IBM Public Cloud infrastructure. This is great news for customers who are looking to get started fast and leverage the benefits of Infrastructure as a Service (IaaS) with instant GPU computing in the cloud and Platform as a Service (PaaS) with instant availability of programming tools without having to set them up. As per NVIDIA’s announcement at Supercomputing 2017, other cloud providers such as Microsoft, Google and Amazon are offering/will offer similar GPU cloud offerings. There is a race for winning in the Artificial Intelligence market and it is not surprising that cloud providers are quickly adopting the big shift in computing as the importance of GPU is growing very rapidly due to it high core and computational capabilities. As per NVIDIA, the Tesla V100 offers the performance of 100 CPUs in a single GPU—enabling data scientists, researchers, and engineers to tackle challenges that were once impossible.

There are several benefits of GPU based IaaS & PaaS public cloud offerings :

Above is a snapshot of IBM’s NVIDIA Tesla V100 GPU based cloud server instances that can be ordered and consumed instantly after signing up on IBM’s public cloud.

Just as with CPU based cloud computing infrastructure, we can anticipate a huge debate on Public vs Private Cloud for GPU infrastructure as well. Below are some of the concerns that I see with  GPU public cloud adoption :

For on-premises deployments, NVIDIA Tesla V100, P100, P40 GPUs have been available as standalone cards to be used with standard Intel and AMD servers and also come in optimized designs such as the SXM2 for maximum performance. Most server vendors support Tesla cards as they have gained more adoption beyond just being used for high-end graphics applications. In addition to public cloud, IBM also offers NVIDIA GPUs with POWER9 servers for customers who prefer on-premises GPU solutions.

GPUs are very suitable for autonomous cars, molecular dynamics, computational biology, fluid simulation, CAD etc and even for advanced Virtual Desktop Infrastructure (VDI) applications. At Dihuni, we believe that Internet of Things (IoT), Artificial Intelligence (AI), Deep Learning, Machine Learning (ML) and other Big Data and Digital Transformation applications will require to be processed both on-premises and in the cloud depending upon the application and we are suitably positioned to help customers with their GPU server processing requirements. For IoT, we believe GPU processing will be a huge performance driver with wider adoption in 2018.

For on-premises customers, Dihuni offers NVIDIA Tesla V100, P100, P40, P4 and K80 GPU cards that can be purchased directly at our online store and used with compatible Intel or AMD EPYC servers. Or customers have the choice of procuring complete GPU optimized systems such as the Supermicro SYS-4028GR-TVRT with up to 8 NVIDIA Tesla V100 or SYS-4028GR-TXRT with up to 8 NVIDIA Tesla P100 GPUs. These servers support NVIDIA NVLink which is a high-bandwidth, energy-efficient interconnect that enables ultra-fast communication between the CPU and GPU, and between GPUs. Our whole line of GPU optimized servers including from TYAN can be found here.

Customers should decide what is best based for them based on the type of application they want to use GPU power for. In some cases public cloud will make sense and in others private or hybrid (pubic + private) cloud model will work. We always welcome your thoughts; email us at digital@dihuni.com