Note: All products ship globally from withiin USA from our faciilities or distributor/manufacturer warehouses. Custom servers are built and tested directly by manufacturer and current eta ~ 4-6 weeks subject to component availabilty. Fill out your server requirements below. Best, qualified, approved and accurate pricing direct from manufacturer vs high priced configurators. 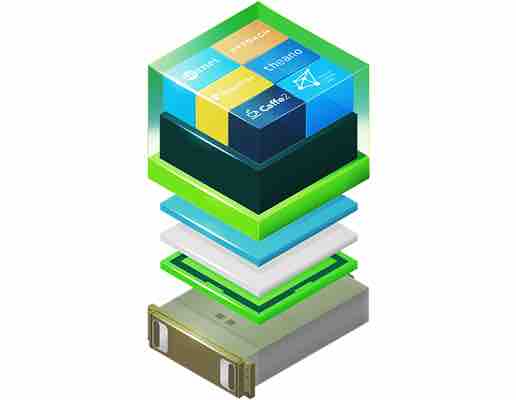 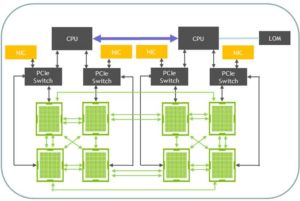 Systems with multiple GPUs and CPUs are becoming common in a variety of industries as developers rely on more parallelism in applications like AI computing. These include 4-GPU and 8-GPU system configurations using PCIe system interconnect to solve very large, complex problems. But PCIe bandwidth is increasingly becoming the bottleneck at the multi-GPU system level, driving the need for a faster and more scalable multiprocessor interconnect. NVIDIA® NVLink™ technology addresses this interconnect issue by providing higher bandwidth, more links, and improved scalability for multi-GPU and multi-GPU/CPU system configurations. A single NVIDIA Tesla® V100 GPU supports up to six NVLink connections and total bandwidth of 300 GB/sec—10X the bandwidth of PCIe Gen 3.

“On initial internal benchmark tests, our 4029GP-TVRT system was able to achieve 5,188 images per second on ResNet-50 and 3,709 images per second on InceptionV3 workloads,” said Charles Liang, President and CEO of Supermicro.  “We also see very impressive, almost linear performance increases when scaling to multiple systems using GPU Direct RDMA. With our latest innovations incorporating the new NVIDIA V100 32GB PCI-E and V100 32GB SXM2 GPUs with 2X memory in performance-optimized 1U and 4U systems with next-generation NVLink, our customers can accelerate their applications and innovations to help solve the world’s most complex and challenging problems.”

“Supermicro designs the most application-optimized GPU systems and offers the widest selection of GPU-optimized servers and workstations in the industry. Our high performance computing solutions enable deep learning, engineering and scientific fields to scale out their compute clusters to accelerate their most demanding workloads and achieve fastest time-to-results with maximum performance per watt, per square foot and per dollar. With our latest innovations incorporating the new NVIDIA V100 PCI-E and V100 SXM2 GPUs in performance-optimized 1U and 4U systems with next-generation NVLink, our customers can accelerate their applications and innovations to help solve the world’s most complex and challenging problems.”

Supermicro Server Manager (SSM) provides capabilities to monitor the health of server components including memory, hard drives and RAID controllers. It enables the datacenter administrator to monitor and manage power usage across all Supermicro servers allowing users to maximize their CPU payload while mitigating the risk of tripped circuit. Firmware upgrades on Supermicro servers became easier now with a couple of clicks. Administrators can now mount an ISO image on multiple servers and reboot the servers with those images. The tool also provides pre-defined reports and many more features that will make managing Supermicro servers simpler. Download the SSM_brochure for more info or download Supermicro SuperDoctor® device monitoring and management software.