As a Lenovo Partner and NVIDIA Preferred Solution Provider, we are authorized by the manufacturer and proudly deliver only original factory packaged products.

The following table summarizes the server support for the GPUs. The numbers listed in the server columns represent the number of GPUs supported. 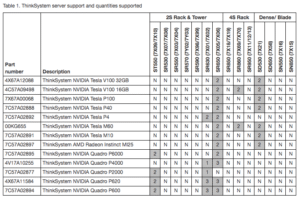 The Tesla V100 GPU, widely adopted by the world’s leading researchers, has received a 2x memory boost to handle the most memory-intensive deep learning and high performance computing workloads.

Now equipped with 32GB of memory, Tesla V100 GPUs will help data scientists train deeper and larger deep learning models that are more accurate than ever. They can also improve the performance of memory-constrained HPC applications by up to 50 percent compared with the previous 16GB version.

Dihuni is a Virginia, USA headquartered company and all products ship from warehouses within the USA. Due to industry wide shortages, we strongly encourage to confirm stock/eta before ordering. Send an email to digital@dihuni.com or call a customer support agent at +1-703-570-7300 for stock/eta/product info, quote requests or purchase orders. Dismiss

Brought to you by WisdmLabs: WordPress Development Experts